Innovative brain wave technologies such as brain hacking gadgets and location intelligence have led to parallel worlds in which S, a cleaning android extracts and digests unconscious memories and as such transforms human trauma into poetry.

Remains of a Cosmic Cleaning Performance, the third part of the DEAD DAY DOG trilogy, is a lecture in the form of science-fiction scenarios ,told by a split personality who reports from parallel worlds. “Kim, Kim-Kim” functions as chief witness of a polyvagal informed society and offers at times utopian, at times distopian perspectives on living and working conditions in ‘smart cities’ where traumatic memories are part of the collective (un)consciousness.

The lecture is raw and risky. Rather than a finished product, it is an attempt and a proposal by a group of performance artists, seeking to work on a future experiment which highlights and critiques the role of New Media as applied within ‘Smart Cities’. 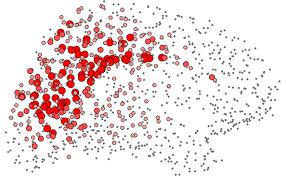 When we talk about safety, do we talk about Feelings of Safety or rather a Cognitive Construction of Safety (Surveillance Culture)? What about the ethics and politics of measuring tools for safety? How are they being applied in ‘smart cities’, where trauma lingers as a past in the present moment?

How do we connect and disconnect with one another once we become aware of each others’ bodily states? Playing with different levels of arousal, an experiment led by the dancer and computing scientist Kai Brügge shows at what point we tend to fight, ‘flight’ or perhaps go into avoidance and/or dissociation. Through Live-Tracking, Kai proposes to connect an innovative GPS system with heat maps, visualising personal data (biofeedback).

The focus lays on different strategies people develop when consciously and collectively dealing with varying bodily states of arousal. As such technological biofeedback is critiqued as both social remedy and as poison for living and surviving in a traumatised world controlled by surveillance culture.